I’m using myself as an example of what NOT to do.   It turns out (as usual) that the video doesn’t lie.   I had a pretty good run, our first outdoor run of the year and we placed second in the 1D against a group of horses who were also just getting rolling this spring.   Not a big jackpot, but big enough I was still surprised to place this well.   I was really tickled with my run and even told a friend the only thing I would have changed was that I would have been a bit braver on the way to first.

After watching the video, I realized I had actually lost my time on the way into second barrel.   I did that thing that I get after my riding students for doing all the time.  UGH.  I started my turn into second barrel too soon.  I also looked right at the barrel. 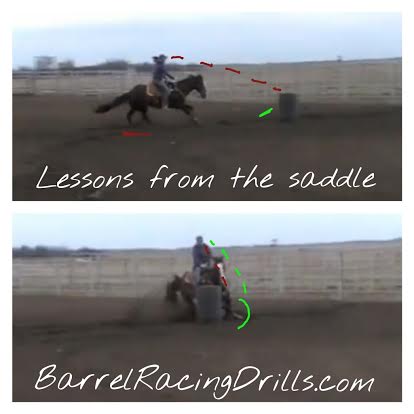 As you can see in the picture (red) her hip is to the outside of the turn and I’m looking at the barrel.  This resulted in us being too tight coming into the turn.

Fortunately for me, my horse saved my butt and finished second nicely with only a stutter step to get back in position.   If I were to continue down this road without recognizing this problem I will have a horse that starts shouldering and/or pulling off the backside to make up for the room I’ve taken away.

What did I do about it?
I went back to my slow work where I could feel I had created a habit.   Even at a trot I could feel she was starting the turn before I asked.  I really needed to look up over her ears and send her hip up past that barrel before allowing her to turn.    I also did a couple stops, with hip in exercises to emphasize the positioning I wanted.       For those of you that subscribe to my Barrel Racing Drills.com website, I did the “Pick Up and Turn Back” Drill at second barrel as well.

This is definitely something I recognize I caused through my riding.  I am a bit of a cautious rider so I have a tendency to think those barrels are coming up awfully fast.  Being that this was our first outdoor run of the year, we were going across there quicker than I was used too as well. You’ll see in the video the  mare just does what’s she’d told.   I’ll do better next time!  I promise.  I’m putting on my big girl panties and I’m going to ride her up into the hole 🙂

This is a really easy thing to get into a bad habit of if you don’t nip it in the bud.  I hope my oopsie helps you from making the same mistake.

Looking for Barrel Racing Drills and Exercises? Check out our sister site www.BarrelRacingDrills.com and get your access pass to improve your times today!

Thank you for visiting FreeBarrelRacingTips.com Check back often, and be sure to click the Facebook icon above and follow there for great tips. I look forward to sharing many of the tips I learn on the internet or learn from my own horses. ~Enjoy~ Michelle Davey